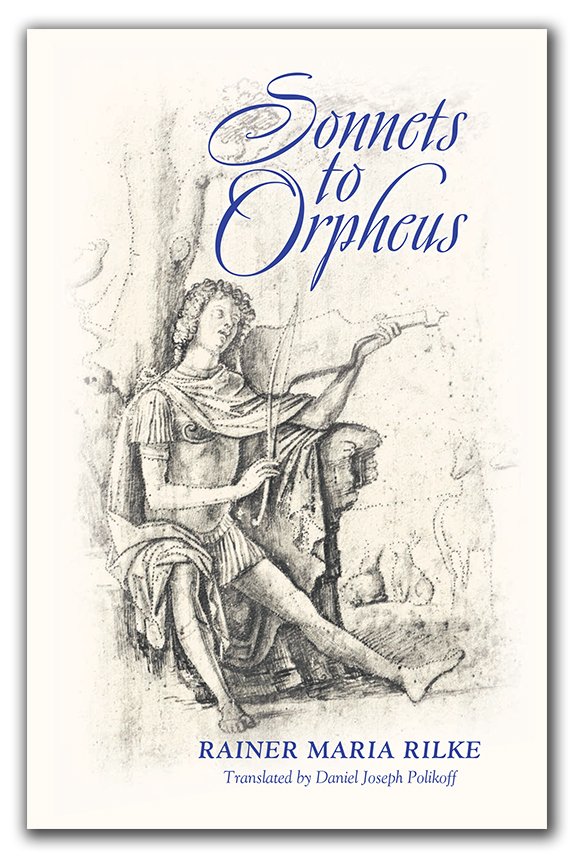 Composed in a burst of inspiration near the end of the poet’s life,   Rilke’s Sonnets to Orpheus represents the consummation of the writer’s career, distilling the essence of his poetic wisdom in a gem-like sequence. This new translation—with the original German on facing pages—offers a clear window into the world of this endlessly scintillating cycle of poems. It includes, as well, an illuminating introduction that helps place the Sonnets within the context of Rilke’s work as a whole, and draws upon Joseph Campbell to construe the mythic significance of Rilke’s uniquely compelling version of Orphic wisdom.

“Daniel Polikoff’s English version of Rilke’s last sonnet sequence, perhaps his greatest work, is wholly admirable. Rilke’s late work is extremely difficult to penetrate. Both its conceptual nature and Rilke’s unique use of the German language tend to resist interpretation. Literal translation of his idiosyncratic constructions are rarely possible and English equivalents are hard to come by. Astonishingly, Polikoff has found ways of rendering Rilke’s complexities into English and also preserving his metrical and rhyme schemes. Such an accomplishment is possible only with a deep understanding of Rilke’s vision and a knowledge of the root structure of German. Daniel Polikoff gives us Rilke in word and spirit in these splendid Sonnets.”

—LISEL MUELLER, National Book Award for Poetry (1981) for The Need to Hold Still; Pulitzer Prize for Poetry (1997) for Alive Together: New and Selected Poems

“Daniel Polikoff is the first to achieve the unimaginable: an English translation  which brings  the form and content  of these Sonnets together into an organic confluence. These new translations lift our understanding of Rilke’s spiritual  and aesthetic inspiration up to a whole different level, one accessible for the first time  to the English reader. As a professor of German literature who has taught these sonnets for over thirty years, I can only thank Daniel Polikoff for this phenomenal accomplishment. His version should serve as the new standard for Rilke translations and belongs on the bookshelves of every poetry lover.”

—LUDWIG MAX FISCHER, author of The Seasons of the Soul: The Poetic Guidance and Spiritual Wisdom of Herman Hesse

“This is a uniquely faithful, skillful, and eloquent translation of one of the greatest poems of the 20th century. I salute Daniel Polikoff and recommend his wonderful work to all seekers and lovers of poetry.”

—ANDREW HARVEY, author of Teachings of Rumi and The Flame

A tree rose up! O pure transcendence!
O Orpheus sings! O tall tree in the ear.
And everything hushed. Yet in that quiet cadence
new transformations were beginning to appear.

Creatures of calm thronged out of the clear
freed forest, out of nest and den,
and it so happened that it was neither fear
nor cunning that made them quiet then,

but listening. Growl and roar, shriek and hiss
seemed small inside their hearts. And where
there had been barely a hut to receive all this—

a lean-to made of darkest love and fearing
with an entrance that shivers in the air—
you built them temples deep inside their hearing.
I, 20

But what shall I offer to you, Master, say
tutor of creatures, song’s soft source?
My memory of a single spring day,
at evening, in Russia, a horse…

He came from the village alone, all white
—on one front fetlock the fetter—
to be on the meadow alone at night;
how his mane beat better and better

time upon the neck held high
despite the rudely constrained gallop.
O, how that stallion’s blood sprang up!

He felt the open spaces nigh…
he sang and heard. Your myth-circle, Sayer,
closed in him.
His image: my prayer.