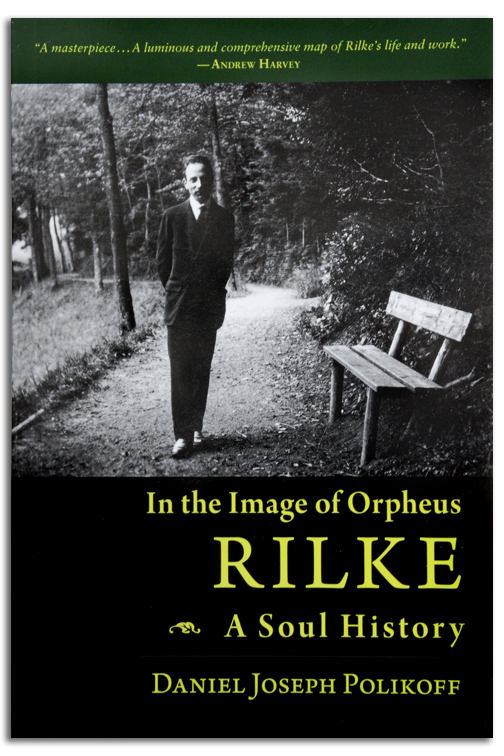 In the Image of Orpheus tells the inner story of Rilke’s literary career, tracing—step by step—the mythopoetic journey inscribed in the interweaving lines of the poet’s life and art. Blending biography with in-depth analysis of Rilke’s poetry and prose (from his little-known Visions of Christ through the Sonnets to Orpheus), the lively narrative draws upon Hillman and Jung, Plato and Petrarch, Apuleius, Ibn Arabi and Lou Andreas-Salomé as it unfolds the poet-seer’s vision of the nature and destiny of the human soul—a vision as timely as it is timeless.

Praise for In the Image of Orpheus:

A masterpiece….A luminous and comprehensive map of Rilke’s life and work. —Andrew Harvey, author of Song of the Sun: The Life, Poetry & Teachings of Rumi and The Hope: A Guide to Sacred Activism

Equal parts incisive literary criticism and powerful spiritual reflection….Meticulously charting the progress of Rilke’s remarkable and complex poetic achievement, Polikoff traces also Rilke’s passage through a life’s and the soul’s passions. This is a book for any and every admirer of Rilke’s poetry.   —David St. John, a poet, teaches at the University of Southern California and is the author of The Red Leaves of Night

“A profound book….The splendid style of the writing, the breadth of cultural erudition, the coherence of the biographical narrative all contribute, but these reflect something of larger import. By focusing the powerful lens of depth psychology on Rilke’s life and work, In the Image of Orpheus carries us deeper into the interior of the poet’s imaginative landscape than ever before. It is difficult to conceive of a study that might bring greater psychological subtlety and spiritual insight to the evolution of this deep-souled poet. One ends with new appreciation of both the power of art in forging a soul, and the centrality of the soul in the creation of great art.   —Richard Tarnas,  Professor of Philosophy and Psychology, California Institute of Integral Studies, author of The Passion of the Western Mind and Cosmos and Psyche

Rilke goes on speaking to us, for us, and for his own rare self. Polikoff’s generous journey through a life’s work demonstrates the poet’s ultimate affirmation and may transform your sense of what it means to fully honor the soul.” —John Felstiner, Professor Emeritus at Stanford University, is the author of Translating Neruda: The Way to Macchu Picchu

“The best study on Rilke I have read in English…. A superb piece of academic scholarship and much more…. This book offers an education not only in Rilke and Hillman, but also in what soul-making means in a person’s life. —Ludwig Fischer teaches German language, literature, culture, and comparative mythology at Wilamette University in Salem, Oregon, and produced In the Temple of Listening: The Poetic Vision of Rainer Maria Rilke

In the Image of Orpheus includes many Rilke poems in Daniel Polikoff’s own translation.

THE PANTHER
In the Jardin des Plantes, Paris

The passing of the bars fatigues his gaze
so much, that it can hold no more.
To him, it is as if each bar were a maze
that led to another, and another barred door.

The quiet pacing of strong and supple limbs
that turn around the very smallest sphere
is like a dance of power around the rims
of circles, that hold a great will numb in there.

Only seldom does the pupil’s curtain slide
soundlessly up—. Then an image enters,
ripples through the tensely stilled stride
and ceases where the rhythm centers.