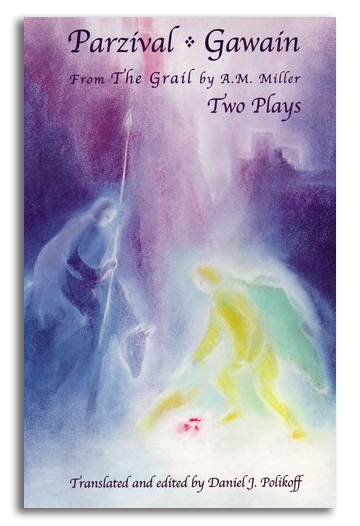 From The Grail by A. M. Miller, translated and edited by Daniel J. Polikoff

In the 12th century, bilingual Breton minstrels narrated Celtic takes of King Arthur in French prose, furnishing the court poet Chrétien de Troyes with material for the adventures of his legendary hero Perceval. Around 1210 (some 30 years after Chrétien), Wolfram von Eschenbach finished Chrétien’s story in his own idiom, completing an epic romance in Middle High German verse couplets. Wolfram read the name of Chrétien’s hero as perce a val—pierced through the middle—striking a religious note characteristic of the German stream of the Grail legend. In the middle of the twentieth century (some 750 years afterWolfram), the German poet Arthur Maximilian Miller dipped (or plunged) into that stream once more, recasting Parzival in dramatic form.

Why does the Parzival legend exercise such a lasting hold on the imagination? Perhaps in part because this medieval epic strikes a peculiarly modern tone: it is one of the first works to portray the inner development of its hero, and in so doing translates the dominant religious mythos of the West into terms amenable to individual imagination and experience. As we follow Parzival’s transformation from a knight of the sword into a knight of the word, we see spiritual truths enacted in the language of life. We present this version of Parzival as an offering to the human community in the belief that the timeless wisdom contained in the Grail legend makes it truly “a vessel of grace.”

“A worthy contribution to the Grail literatue (and also to the repertoire of dramatic works suitable for the Waldorf high school curriculum), Daniel Polikoff’s inspired translation captures the high drama and lyric beauty of Miller’s art. These dramatic recastings of the German original build a bridge to modern times, and admirably reflect the ideals and enthusiasm for the spirit that the Grail legends evoke in so many seekers.”