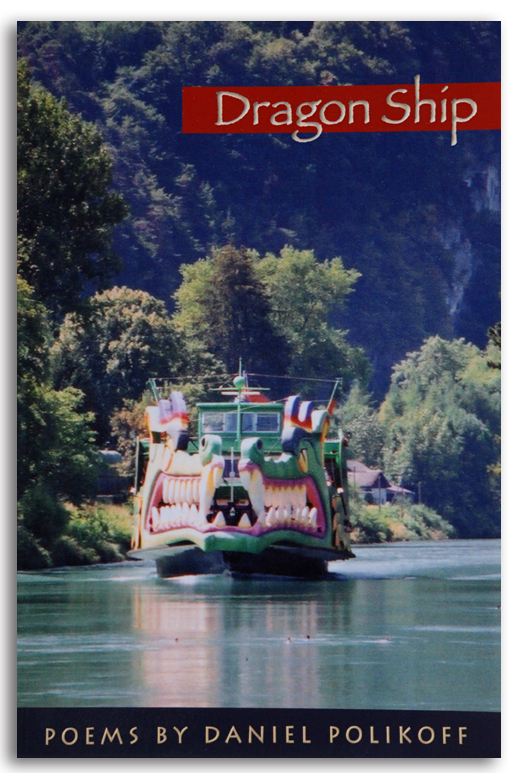 A ferris wheel transforms into a zodiac of stars; a game of poohsticks becomes an act of prayer; deity itself appears as a “blind musician/with a thousand dancing hands.” Following the seasons of a poet’s life over the course of two years, Dragon Ship continually discovers spiritual significance in everyday “incidents of being.” The mythic figure of the dragon, recurring in kites, festivals, alchemical texts, and a ship in Switzerland, joins the worlds of creative and destructive potential in one leading archetypal image.

“Daniel Polikoff is such a gifted and perceptive writer, with nuanced details which, although delicate, resonate clear as a strong bell after the poem has concluded. I think I shall not look at a bullfrog again without seeing wedding rings in its eyes. To create music of such depth is a real accomplishment.”

“Dragon Ship shares the epic voyage of a father and his son. Daniel Polikoff gives us a series of moving and spiritual poems that pair the wide-eyed innocence of a child’s outlook with the layered complexity of a skilled poet’s world view.”

We’re out looking for the song-
spawn of spring. Curtained
by cattails, the pond
is quiet, but we know the double-bass is in there
somewhere. Treading the edge, we
jump at each invisible

telling us we missed something
big. Brushing back cattails, we finally
spy him—he’s
wearing wedding rings
in his eyes. Hyden
shouts hello, and the gold
ripples
to the bottom of the pond. Now I hear
music—the deep
sound of myths
throbbing in the throat.

The machine whirrs
while a man lies stretched out upon a cross-shaped gurney.
The violins and trumpets are speechless.
The machine debuts its hoarse death-rattle: click,whirr, click, whirr, click…

Like many before him
the man strains hard against the thongs that strap him down;
black milk flows through his arms.
He lifts and twists his head;

strains hard against the thongs that strap him down;
but his blood drinks the black milk; the black milk’s in his mouth.
He lifts and twists his head—
that darkening gaze, those half-wild eyes—

but his blood drinks the black milk; the black milk’s in his mouth.
And we—we—are the witnesses. We watch
that darkening gaze, those half-wild eyes
while the machine sings its toneless solo center stage.

And we—we—are the witnesses. We watch
silently as his struggle slowly ceases
and the machine sings its toneless solo center stage.
For Death is a master from…

Silently, his struggle slowly ceases—
he turns from us, he turns toward her
for Death is a master from…
Drowned in black milk,

he turns from us, he turns towards her…
The machine whirrs;
drowned in black milk,
the violins and trumpets are speechless.